A 28-year-old woman complained of pain in the left hemithorax and light dyspnea in the last two weeks. She reported no fever or sputum production. She was seen in an emergency, and she had been treated with levofloxacin in past seven days, but with no significant improvement.

A representative image of an HRCT of the thorax, performed one week before, is shown below: 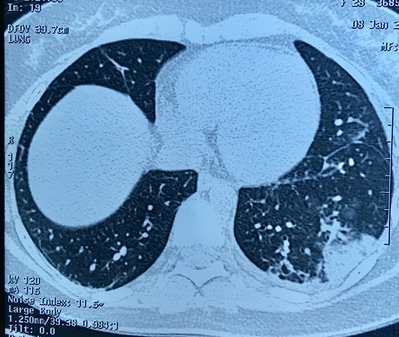 How would you describe the radiologic findings?
What is the most probable diagnosis in your opinion?
Which additional diagnostic tests would you order?


To add an answer on this topic and read the replies...