At the end of this chapter the reader should be able to:

Maintenance of normal pH and oxygenation levels compatible with tissue metabolic demand  is essential to the cells and organ functions. This function results from complex interaction among respiratory and cardiovascular systems, the cellular metabolism and blood gas transport. In this context, acute respiratory failure (ARF) could be defined as an incapacity of  the respiratory system to capture oxygen (PO2) and/or to remove carbon oxide (PCO2) from the bloodstream and tissue cells. It is a syndrome, and not a disease, with several possible causes. This is due to the complexity of the respiratory system and its diverse components. Breathing can be understand as a chain whose links are composed by the interaction between various organs and systems of the human body.

The three first components of the chain constitute what is called the “ventilatory pump” and are responsible for the minute and alveolar ventilation. Failure in its function results in PCO2 retention in the blood and hypercapnia, which would secondarily compromise oxygenation, limiting alveolar gas renewal. On the other hand, pulmonary parenchyma and airways disorders (specially, in the lower respiratory tract) result in defective oxygenation but with maintenance of the CO2 elimination, provided that the ventilatory “pump” works properly. The last component in the figure constitutes the gas transport system to tissues of the body. Cases of shock severe anema and/or hemoglobin dysfunction could also cause ARF. Failure in one or more components of the respiratory system chain could result in ARF, which frequently has multifactorial causes. For example, a patient who suffered "brain" injury, lung contusion and hemorrhagic shock presents multiple components to develop ARF. Besides the diversity of causes, the diagnostic approach, the classification, as well as the treatment, include general principles as follows.

Acute respiratory failure (ARF) can be classified in three types based on arterial blood gas (ABG) parameters: hypercapnic, hypoxemic or mixed. The hypercapnic ARF is characterized by the increased PaCO2 levels above 45-50mHg with resultant acidemia; pH<7.34. The hypoxemic ARF is defined by PaO2 levels < 55-60mmHg, in room air or with indication for oxygen therapy with no CO2 retention. The “mixed” ARF is characterized by severe hypoxemia associated to CO2 retention with respiratory acidosis. For example, a patient with severe pneumonia, in general, initially presents hypoxemic ARF that may progress to respiratory muscle fatigue and secondary failure of the ventilatory “pump” and hypercapnia. Still, patients with neuromuscular disorders may present hypercapnia due to muscle weakness, which may cause alveolar hypoventilation and, consequently, complications such as mucus retention and atelectasis, adding the hypoxemic component caused by lung parenchyma disorder. Table 1 shows the main differences among the three types of ARF.

The hypercapnic ARF is invariably associated to alveolar hypoventilation with resulting mild hypoxemia. In the hypoxemic type, however, the main alteration is the increased D(A-a)O2 caused by the pulmonary parenchyma disease and ventilation/perfusion (V/Q) mismatch.

The pulmonary causes of hypoxemia or hypercapnia include: dead space, impairment of gas diffusion, V/Q mismatch and shunt. It is not always possible to determine which is the predominant mechanism in a clinical scenario. Different levels of V/Q disorders may coexist in the patient’s pulmonary parenchyma. Figure 2 shows a scheme with the main differences among V/Q disorder mechanisms.

Figure 2. V/Q dysfunction mechanisms in the pulmonary parenchyma may cause hypoxemia and/or hypercapnia.

When shunt is predominant above other mechanisms, the hypoxemia is more severe and refractory to oxygen therapy, meaning that high levels of inspiratory oxygen fraction (FIO2 >50-60%) are needed to reach PaO2 values between 60 and 70mmHg, as in ARDS. In cases of significant alveolar dead space (large areas of pulmonary parenchyma without perfusion), such as in pulmonary emphysema, there may be both hypoxemia and hypercapnia due to alveolar hypoventilation and V/Q mismatch, especially if the ventilatory pump could not compensate the baseline disturb.

There are some exceptions regarding this classification like the defective oxygen transport caused by heart failure and/or hemoglobin dysfunction (including high levels of methemoglobin in the blood) and hypoxemia due to low atmospheric pressures in places with high altitudes.

It is worth mentioning the differences between acute and chronic respiratory failure. The first develops quickly, within minutes or hours and is characterized by its instability and worsening of gas exchange with the progression of the baseline condition. The second develops more slowly, along days, weeks or months and stabilizes by means of physiologic compensatory mechanisms. This difference is important for the evaluation of patients with diseases such as Chronic Obstructive Pulmonary Disease (COPD), neuromuscular disorders of slow progression or chest wall deformities such as Kyphoscoliosis. In these cases, the consequences of CO2 retention due to ventilatory impairment on blood pH are compensated by the retention of bicarbonate by the kidney. Some patients develop ARF over the chronic respiratory failure. The presence of elevated bicarbonate levels with normal pH or in values higher than expected for the level of CO2 retention indicates that the condition has been ongoing for, at least, a few days.

Both the arterial hypoxemia and hypercapnia result in clinical manifestations that point to the diagnosis of ARF. All patients require objective assessments of the pulmonary gas exchange, such as pulse oximetry and arterial blood gas analysis. The clinical scenario will depend on the underlying disease and the precipitating factors. In general, patients with hypoxemia, with or without hypercapnia, present “respiratory distress”. This is characterized by the combination of one or more findings: altered state of consciousness (from agitation to lethargy), increased work of breathing [nasal flaring, use of accessory muscles, intercostal retraction, Hoover sign, suprasternal and supraclavicular retractions, tachypnea (RR > 30 bpm), paradoxical breathing], central cyanosis (including lips and tongue), sweating, tachycardia, hypertension or other signs of adrenergic stimulation. The hypercapnia usually causes increased intracranial pressure and lethargy, which could progress to narcosis associated to tremor of the extremities with flapping and cutaneous vasodilation. Figure 3 and videos 1 and 2 show some clinical signs indicating “respiratory distress” commonly present in patients with ARF.

Vídeo 1. (left) shows the presence of intercostal retraction and video 2 (right) shows paradoxical respiratory movement due to diaphragm paralysis.  Both patients had ARF.

Figure 3. Inspiratory (left) and expiratory phases (right) on a patient with asthmatic crisis using accessory muscles (sternocleidomastoid) with supraclavicular and suprasternal retractions on the inspiratory phase.

The pulse oximetry in room air shows evident decline in SpO2 to values below 90-93%. Note: pulse oximetry has low accuracy in clinical conditions of low peripheral perfusion (e.g. shock), in cases of methemoglobinemia or inadequate positioning of sensor on patient’s finger. The arterial gasometry is a mandatory test and should be performed whenever intratracheal intubation is not immediately indicated. Besides gasometry, the following tests should be considered: chest X-ray, ECG, biochemical analysis (electrolytes, glucose and renal function) and hemogram. Table 2 lists the main causes of ARF and the most common associated findings.

The main objectives of treating patients with ARF includes: to relief respiratory discomfort solving signs and symptoms related to hypoxemia and/or hypercapnia; to revert respiratory acidosis and hypoxemia and to provide adequate oxygenation of extra-pulmonary organs. Therefore, the initial treatment is mainly for life support, in order to buy time to reverse the underline cause or causes of the ARF wtih specific therapeutic intervention.

The majority of patients with acute respiratory failure require oxygen therapy. The oxygen exchange from alveoli to the capillaries occurs by diffusion and it is determined by the alveolar-arterial oxygen gradient, D(A-a)O2. Most of the times it is possible to revert hypoxemia by increasing oxygen alveolar pressure with supplemental oxygen. The therapeutic goal is to correct hypoxemia in order to guarantee adequate oxygen delivery to tissues (DO2). The DO2 results from the amount of oxygen in the arterial blood (CaO2) multiplied by the Cardiac Output (Q). The dissolved oxygen measured by ABG analysis corresponds only to a minor part of the CaO2, which is almost entirely composed by the oxygen bound to the hemoglobin. A satisfactory CaO2 is usually achieved with hemoglobin SaO2 of 90-92% and PaO2 values ranging from 60-70mmHg. Greater PaO2 elevations marginally affect SaO2 and have little effect on O2 transportation. Figure 4 illustrates the importance of hemoglobin and the effect of the O2 dissociation curve on CaO2 and therefore on the O2 delivery to tissues.

Figure 4. Influence of PaO2, SaO2 and dissociation curve on CaO2. Increase of PaO2 above 60-80mmHg has little influence on CaO2.

Table 3 describes the main devices used to give supplemental oxygen to patients with ARF.

Figure 5 illustrates the most common types of O2 delivery systems. 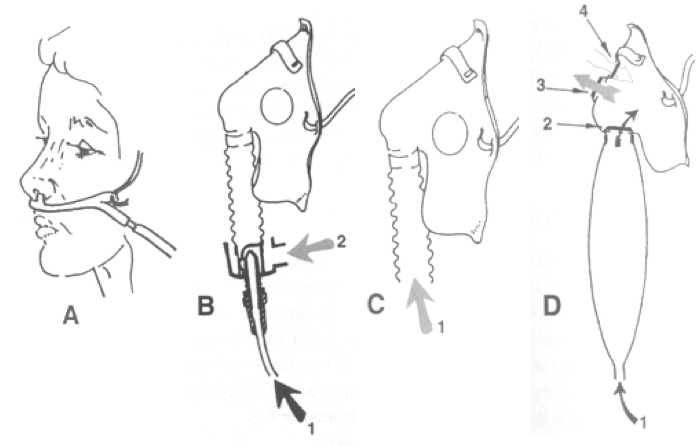 The response to oxygen therapy should be evaluated and interpreted to establish the predominant cause of hypoxemia and to determine the severity of acute pulmonary injury cases. The most used index is the PaO2/FIO2 ratio. Normal values range from 450 to 500. Values below 200 indicate more than 20% of lung parenchyma with shunt. Values between 200 and 300 indicate 10 to 20% shunt, approximately.

It is important to highlight that oxygen therapy does not revert hypercapnia; it requires interventions that would increase alveolar ventilation, such as ventilatory support (invasive or non-invasive). In hypercapnic ARF the excessive administration of oxygen could actually aggravate the patient due to the effects of hyperoxia on the respiratory drive and favors absorption atelectasis, eventually worsening the V/Q ratio in the lungs. This adverse effect is more common in exacerbations of severe COPD patients and in ARF due to neuromuscular diseases with hypercapnic ARF.

Mechanical ventilation (invasive or non-invasive) is indicated on ARF with the following objectives:

If possible, positive pressure ventilatory support may be offered as a non-invasive method using masks or special interfaces. This strategy should be considered in cases of COPD exacerbation and other clinical conditions (see Non-invasive ventilation chapter) as long as none of the following conditions are met:

It is obvious that for the majority of cases, especially the more severe, the intratracheal intubation may be necessary. It is important to highlight that this would be a procedure with indication based on clinical considerations and should not be postponed for any reason, such as waiting for the ABG analysis.

Acute respiratory failure (ARF) is a syndrome characterized by hypoxemia, with or without hypercapnia and respiratory distress. As far as etiology and pathophysiology, a diversity of respiratory system components may be affected, including extrapulmonary organs (such as the neuromuscular systems, the chest wall, the cardiovascular status and the hemoglobin level). The diagnosis should be quickly established and based on the identification of signs and symptoms related to gas exchange deficiency and respiratory mechanics. Pulse oximetry is mandatory. Arterial blood gas analysis and chest X-ray are essential complementary tests for the classification, evaluation and to investigate the main cause of ARF. The treatment is initially supportive, involving oxygen therapy with or without mechanical ventilatory support while searching for the optimal treatment of the main ARF cause. Mechanical ventilation may be used invasively (tracheal intubation) or non-invasively (masks and other interfaces). Oxygen therapy should be given with extreme caution to patients with severe COPD exacerbation and neuromuscular diseases.