JOURNAL CLUB: Ventilatory settings in the initial 72 h and their association with outcome in out-of-hospital cardiac arrest patients

Authors from several countries in Europe, Oceania, and others, with Chiara Robba as the first and Prof Paolo Pelosi as one of the "senior" authors, both from the University of Genoa, Italy, investigated the relationship between ventilatory adjustments in the first 72 hours after out of hospital cardiac arrest with mortality and neurologic outcome six months later.

It is a study based on a pre-defined sub-analysis of the Target Temperature Management-2 trial.

A total of 1848 adult patients were included, with 950 survivors (51%). Basic and composite ventilation parameters were recorded every 4h for the first 32h, then every 8h until the third day (72h).

In general, the median values ​​for VT, driving pressure, and others remained at values ​​considered protective.

The figure below shows the temporal evolution of ventilatory parameters of patients who survived compared to those who died. 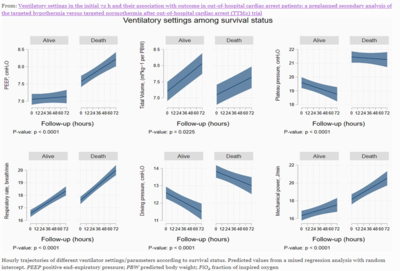 Note the differences between the groups, but only respiratory rate (RR), driving pressure (DP), mechanical power (MP), and ventilatory ratio (RV) were independently associated with 6-month mortality. Only the first two were associated with neurological outcomes.

The data should be interpreted with caution since, being an observational study, it indicates an association but not a cause-effect relationship that can only be inferred as new hypotheses to be better evaluated in future works.

The authors conclude that protective ventilatory strategies and, in particular, measures that minimize DP, the application of high RR (mainly if it results in hypocapnia given the risk of cerebral hypoperfusion), and MP monitoring may be beneficial in the post-PCR patient.

In this context, PEEP should also be used judiciously due to the risks of hemodynamic worsening and its effects on cerebral venous return, as well as the control of PaCO2. They even cite the ongoing TAME study regarding the protective role of mild hypercapnia (Targeted Therapeutic Mild Hypercapnia After Resuscitated Cardiac Arrest).

😎 The work reinforces, in our view, the importance of safe MV in critically ill patients with high potential for brain and lung damage. In particular, DP and the degree of pulmonary ventilation (RR) together appear to be the most critical variables. As the DP results from VT/Cst, its modulation from VT is even more essential.

Here is the link to the full paper (open access):

😏 How about you? How have you been ventilated your post-CARDIAC ARREST patients?


To add an answer on this topic and read the replies...