JOURNAL CLUB: Which oxygen target should we use in our ventilated patients? The PILOT study. 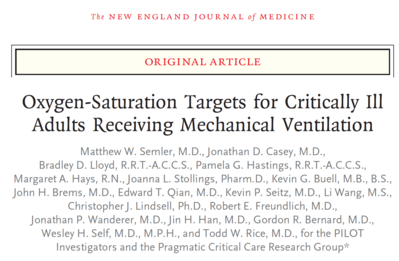 👉They evaluated three ranges of SpO2 targets in intubated patients:

👉It was a pragmatic, cluster-randomized, cluster-crossover trial conducted in the emergency department and medical intensive care unit at a single center (the Vanderbilt University Medical Center) from 2018 to 2021 (36 months of enrollment).

👉Inclusion criteria were adults (≥18 years of age) in the medical ICU or the ED at the time of the first receipt of invasive mechanical ventilation. In addition, patients were excluded if they were pregnant or incarcerated. Covid-19 patients were not included. 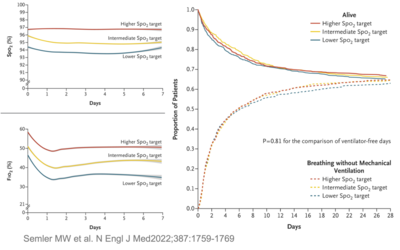 😎Strengths. The study is outstanding in evaluating three different targets for SpO2. Furthermore, it was very well designed and powered to detect meaningful differences among the three groups.

😓 Limitations: It is a single-center study reducing its generalizability. It did not evaluate the long-term effects of the three ranges of SpO2.

🧐 Our opinion: It provides robust evidence that, within the range of SpO2 from 90 to 98%, the choice of oxygen target does not affect short-term important clinical outcomes for a broad population of critically ill adults. It seems reasonable to choose levels around 92 to 96% in most individuals with acute respiratory failure needing ventilatory support to avoid the risks of unintentional hyperoxia or hypoxia.

To add an answer on this topic and read the replies...