Prone Position in Acute Respiratory Distress Syndrome (ARDS): After many back and forth debate, it is finally shown to have significant impact on survival.

For decades the prone position has been used in ARDS treatment. Along with PEEP, this intervention improves oxygenation, decreases and redistributes areas of alveolar collapse, promotes greater balance of pulmonary ventilation to perfusion ratio, creates a more homogeneous distribution of pleural pressure, and experimentally attenuates lung injuries {due to/caused by} mechanical ventilation.

Considering all these benefits, why not use it more often?

Many times the preference is to use extreme measures to rescue patients with severe ARDS utilizing recruitment maneuvers sustained at high pressure, inhalation of NO (nitric oxide), or installation of an extracorporeal membrane oxygenation (ECMO) for circulation and CO2 removal. The answer: Because several clinical trials have failed to demonstrate the impact of this intervention on survival, and because its implementation is not always easy to perform by the ICU team, and has some complications associated with it. The current view is that the prone position has fallen into disuse.

The prone position should be returned to use. Evidence was lacking to justify the use of prone positioning in patients with ARDS, but this has finally been obtained through a study called PROSEVA (Proning Severe ARDS Patients) published in May 2013 in the New England Journal of Medicine1.

Guérin et al. demonstrated in a multicenter study in France (in a randomized controlled trial) that early and prolonged use of the prone position in patients with severe forms of ARDS resulted in a significant reduction in mortality. Their data were robust and compelling. The 28-day mortality rate with ventilation in the prone position was less then half (16.0%) that of supine ventilation (32.8%), both with p <0.001. A treatment effect virtually unprecedented in contemporary medicine, for this syndrome. The survival curves separate within a few days after the start of the intervention, and the benefit persisted after adjusting for the severity of the underlying diseases.

Some aspects of this study deserve special note.

The study group consisted of 466 patients with severe ARDS (PaO2/FIO2<150). Those who were initially considered potentially eligible were included in this group.

A significant portion of patients were excluded for showing improvement in oxygenation levels over a period of 12 to 24 of stabilization.

One important point of the study was that both groups received a protective ventilation strategy, with low tidal volumes, and predetermined criteria for weaning from mechanical ventilation.

It is noteworthy that the previous studies of the centers involved with prone ventilation can not be taken for granted and that the reproducibility of the real-life results can be questioned. An interesting demo video has been made available by the authors of the study that presents the procedure of prone positioning in detail.

What are the practical implications of this study? Undoubtedly, the adoption of the prone position requires teamwork and good team coordination. For many, this position may seem unnatural for an intubated patient, yet all of us move into it when we sleep or rest. In the ICU, there is always the risk of sprains and dislocations, not only to the endotracheal or the tracheostomy tubes, but also to the venous and arterial catheters, as well as other tubes and drains in general. The leads for EKG monitoring should be repositioned to the dorsal region of the patient. Facial swelling may occur, as well as the development of bed sores and lesions on the facial skin and anterior portions of the body. The need for sedation and neuromuscular blocking agents may be increased in patients who are placed in the prone position. 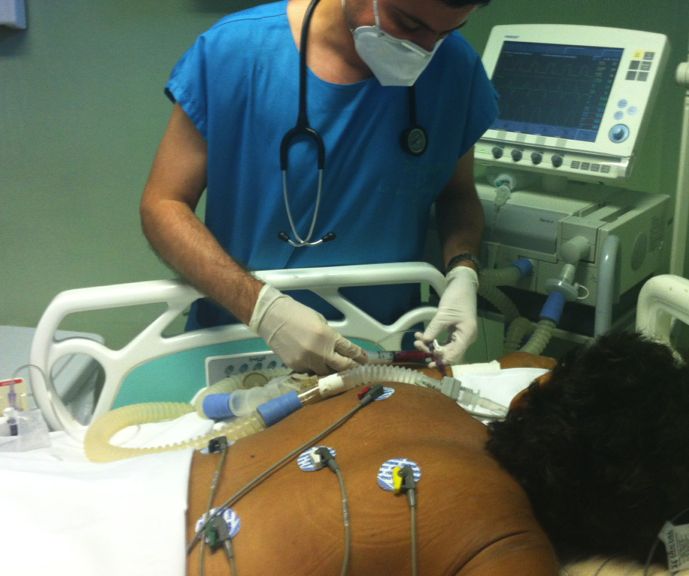 Tables 1 and 2 provide some tips into the process of placing patients with ARDS, in the prone position and it's major contraindications 2.


It is likely that the prone position will be increasingly used, but it is essential to remember that there will be a learning curve, especially in places with limited experience in this procedure, which implies a need for training of the professionals in the ICU. The results of routine use of prone positioning should be analyzed in order to be compared with those obtained by Guérin et al.

- For the first time, it has been shown that the prone position, when adopted early and used for a prolonged period in patients with severe ARDS (PaO2/FIO2<150), significantly reduces the mortality rate.
- The biggest challenge for adoption of this strategy is the need of staff that are motivated and trained in this procedure and its precise execution.